No one was injured after a roof collapsed Monday at Hambden Health & Fitness Center in Hambden Township.The roof collapsed around 6 a.m. from the weight of snow combined with rain Sunday night, Ha...
Read more »
Northeast Ohio girl collects crayons for hospital (Newsnet5.com)
Thu. Aug 4th 2016
A Northeast Ohio girl is getting a lot of attention for shining a light on a problem at a local hospital. It started off as a simple wish. But has now grown into a full-blown campaign. Ella Rose Tyron...
Read more »
Donations being collected for fire victims in Mentor-on-the-Lake, Montville Township (News-Herald) 7-28-16
Thu. Aug 4th 2016
July 27 was a busy day for area fire departments and donations are being accepted for the victims of the fires at 5876 Suwanee Drive in Mentor-on-the-Lake and 16351 Hart Road in Montville Township.No ...
Read more »
News
Heavy Snow collapses Hambden Gym Roof- Geauga County Maple Leaf 12/13/16

No one was injured after a roof collapsed Monday at Hambden Health & Fitness Center in Hambden Township.

Peterson said there was about three feet of snow on the roof when emergency responders arrived on scene.

One person was inside the building, located in Hambden Plaza, 13940 GAR Highway, minutes prior to the collapse, Peterson said.

The man had finished working out and heard “popping and cracking” in the ceiling as he was leaving the gym, Peterson said, adding the man called the gym owner to report what he had heard.

Montville and Chardon fire departments assisted at the scene, the captain said, helping to search inside the gym to confirm nobody was trapped under the snow and debris.

In addition, Peterson said the Geauga County Building Department was on site and a structural engineer inspected the other suites to determine there were no structural issues. 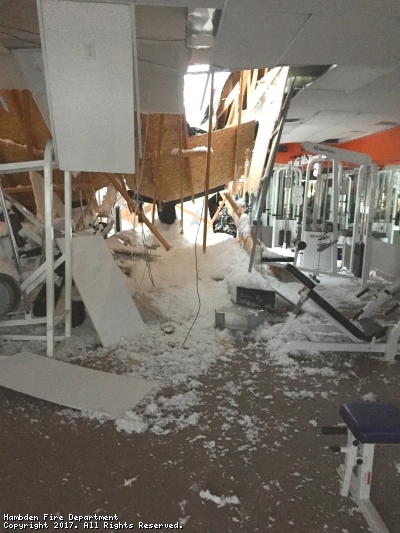 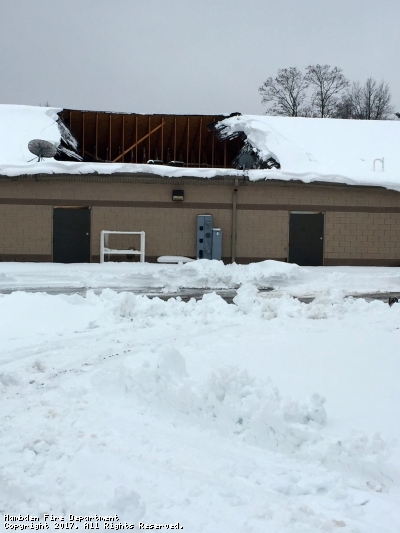 20 entries in the News

Fox 8 News 8/24/17GEAUGA COUNTY, Ohio —  A little boy who touched so many lives was remembered on Thursday.Three-year-old Dutch Cole passed away on Saturday after a brave battle with cancer.When firefighters with the Hambden Fire Department met sweet Dutch several months ago, a special bond was formed.Thursday,  the Hambden Fire Department, along with many others, honored Dutch at the little boy’s funeral. In a post on Facebook, they said,  “Today ...

No one was injured after a roof collapsed Monday at Hambden Health & Fitness Center in Hambden Township.The roof collapsed around 6 a.m. from the weight of snow combined with rain Sunday night, Hambden Township Fire Captain Dave Peterson said.Peterson said there was about three feet of snow on the roof when emergency responders arrived on scene.One person was inside the building, located in Hambden Plaza, 13940 GAR Highway, minutes prior to the collapse, Peterson said.The man had finished wo...

A Northeast Ohio girl is getting a lot of attention for shining a light on a problem at a local hospital. It started off as a simple wish. But has now grown into a full-blown campaign. Ella Rose Tyron started the The "Color Me a Rainbow" crayon donation campaign started in July. She was sick and was at Rainbow Babies and Children Hospital and just wanted to color a rainbow, but found that the crayons were "worn down and dirty."That's when her campaign to collect cray...

Mother's Day Rib DinnerMay 8th 11:30 am - 2:00 pm at Hambden Fire Station 9867 Old State Rd Chardon, OH 44024 Let us cook for Mom this Mother's Day! Pick it up and take it home!Full Slab $20.00Half Slab $16.00Includes:St Louis Pork Spare RibsPotato WedgesBeansSlawA beverageTickets can be purchased from any Hambden firefighter or by calling or stopping at the the fire station. (440)285-3329. Tickets are presale only and must be ordered by May 1st. Delivery available to Police and Fir...

HAMBDEN TOWNSHIP, Ohio– Two people were injured in a two-vehicle crash in Hambden Township Friday morning.The driver of a Toyota Corolla was going east on Chardon-Windsor Road at about 7:50 a.m. when he lost control, the Ohio State Highway Patrol said. The car went left of center and hit a Geauga County Road Department plow truck.The car rolled over a hill before coming to a rest.Both drivers were taken to University Hospitals Geauga Medical Center. Troopers said one person was alread...

A late-night fire caused significant damage at an Avery Dennison plant in Painesville on Oct. 19.Painesville city firefighters responded to the 60,000-square-foot building on Chester Street at 11:28 p.m. for a reported fire. When crews arrived, they found the fire had extended to the roof, said Painesville City Fire Chief Mark Mlachak.The plant was evacuated, but one employee was taken to TriPoint Medical Center in Concord Township for possible smoke inhalation. The injury is not believed to be ...

This week is Fire Prevention Week! Crews will be at our school and day care center throughout the week teaching the children about fire safety and prevention. For more information and facts check outhttp://www.nfpa.org/safety-information/fire-prevention-week

No human occupants were at home when the fire started in the first floor kitchen at a house in the 6900 block of Sidley Road in Thompson Township. Thompson Fire Chief Danny Robison said seven cats and one bird were inside the residence but, as of 8 p.m. on Sept. 6, they had not been located. “I can’t tell you the cause. It started in the kitchen and traveled up,” Robison said. “No humans were inside.” Crews from Thompson, Montville, Madison, Leroy, Hambden and Trumbull Township res...

A morning fire destroyed a garage and a pickup truck and also damaged a house on Aug. 30 in Hambden Township. At 10:48 a.m. the Hambden Fire Department, along with automatic aid from Chardon, Montville and Munson responded to 8585 Old State Road for a reportedstructure fire. When crews arrived they found a fully involved fire in a detached garage that spread to a nearby pickup and house, according to the department’s Facebook page. Firefighters found heavy fire in the attic of the home and w...

Two firefighters were injured in an early morning house fire in Hambden Township on Aug. 7. At 4:41 a.m., the Hambden FireDepartment responded to a structure fire at 13629 Chardon Windsor Road. A resident had woken up to use the bathroom, smelled smoke and helped get two other occupants safely out of the home. Smoke detectors did not go off because the fire was in the attic, said Hambden Township Fire Department Chief Scott Hildenbrand. When firefighters arrived, they found fire coming through t...

An early morning fire caused heavy damage to a Concord Township home on Aug. 5. At about 3 a.m. crews responded to 11660 Jamie Drive for a reported structure fire after a neighbor called 911. When firefighters arrived, they found a working fire with heavy fire throughout the structure, said Concord Township Fire Department Deputy Chief Ron Terriaco. The fire was eventually brought under control, but Terriaco said the home was now “unlivable.” A monetary damage estimate was not yet av...

20 entries in the News 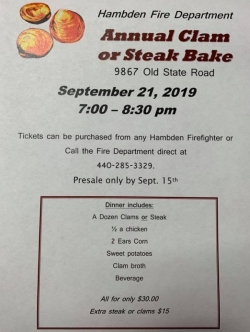 Copyright © 2006-2021. YourFirstDue Inc. All Rights Reserved. Designated trademarks and brands are the property of their respective owners. Content on this web site is supplied by Hambden Fire Department. YourFirstDue Inc. cannot be held responsible or liable for any content, text, pictures, or any other media found on this web site. Maintained by the members and staff of Hambden Fire Department.
Management Login
Powered by